What is this island called?

Bergur points toward the island again: „What is this one called?“ he asks, as he does each time it comes into sight. “Koltur!” we reply in unison. “And behind it is Hestur.”

The “foal” and the “horse”. Koltur doesn’t have any human inhabitants anymore, only sheep. “What’s the island called” has become as much a routine as “which one of you will examine the next dog”. We explore places whose names we usually can’t pronounce and sometimes not even remember, we examine and vaccinate and dogs come in for castrations and sheep to get their horns cut off when they curl into the cheeks.
Most mornings are so foggy that we can barely see the soccer stadium, but it usually clears up, the construction site that is to become a hotel comes into sight, the rest of Tòrshavn, the sea, finally Nólsoy and the wind turbines on the other side of the big fjord of Streymoy.
Yes, the view from our procedure room is amazing!
There is one dog with neurologic symptoms, a regular patient. Not unusual for a Cavalier King Charles Spaniel; as all brachycephalic breeds (you know, those with the so called “cute” short heads and short noses), they have their diseases. Good money for vets, we like to joke. If a Cavalier comes in, you are prepared for either a heart condition or a neurologic problem.
Very often, this is caused by a cyst of the spinal cord, in the neck. It’s called syringomyelia and very common in the Cavaliers. How to diagnose it? A CT scan. What to do? Surgery.
That’s easier said than done. Where would we get that CT to locate that syrinx, as the cyst is called?
They would have to go to Denmark.

“We are fifty years behind with everything” says Kristina. The way how people and animals live together, for example. The cow stables may not be the best from a welfare standpoint. If the dog can’t work the sheep, he will be sold abroad. If there is an injured bird on the side of the road, the neck has to be broken, ensuring a quick death.
And there is no single animal shelter in the country.
It happens a lot that people set their cats free, for example when they want to go on a holiday and don’t know who will take care of the pet during that time. But they can’t survive as street cats in the cities, so they go to the mountains. The birds and hares there have no natural enemies. The islands don’t have any predatory land mammals, no martins, no foxes. There are only birds and sheep and marine mammals. So the cats threaten the indigenous animal population. They usually can’t be tamed again. And where should they go?
They are brought to the hospitals. But what if they don’t have a microchip that enables us to track down the owner?
They have to die.
For other countries, this may seem cruel, and I have experienced too many deaths in these two weeks for my taste, but this is the reality. I can’t take them all in. At the moment, there is no better solution. Unless, of course, somebody wants to increase his or her pet collection by 20 feral cats per week?
We discuss the topic of euthanasia. In Germany, it is by law required to have a “proper reason” to kill an animal. But what is a proper reason? A disease or injury that makes life unbearable. Meat production. Or in special cases, animals that can’t be handled by anyone, for example very aggressive dogs who killed someone. And the vet and the owner have to discuss this together.
Bergur follows a different policy: if an owner comes to have his pet euthanized, he probably has a good reason, and the vet doesn’t ask. It’s hard enough anyway, and it’s likely that if the vets don’t do it, the owner will kill the pet in some other way.
Depending on your background, you as a reader will have different thoughts on this, but for a vet, it’s a big part of everyday work: is it better to keep trying or to release this animal? And how do I comfort the owner? Hell, how do I myself cope with another death?

Fortunately, there are way more cute dogs to be vaccinated or microchipped than anything else. We get to examine, inject, take x-rays, chat with some of the people who come in, research skin diseases of chinchillas and assist in surgeries. My personal highlight is the dental surgery that I get to do on my own: clean the teeth, polish them, take out the worst ones. Johannes is my anesthesiologist this time.
So we get a lot of practice, and there is also a lot of time to learn about the differences in procedures between Germany and the Faroes. For example, while rabies vaccines are mandatory in Germany, here, the dogs only get them when they travel abroad.
There is no reported case of Tetanus ever on these islands.
Let that sink in.
The disease that every other country is so afraid of, has never occurred here. No need to vaccinate.
And when we get home from work, there is still so much daylight that we can go for long walks, run in the mountains or just sit in the sun.
If there is sun. In the two weeks that we are here, we only have two days of rain, but you never know if it will be foggy or cloudy or sunny. Usually, we experience all three in one day. Like in Iceland, the darkness is short in summer. But here, it does get dark for about three hours during the night. 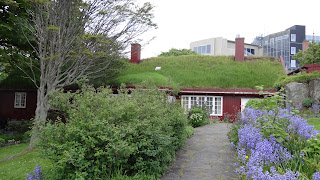 It’s midsummer. Not that this is a big thing in the Faroes, but it is, after all, the longest day of the year, June 21. It happens to fall on a Friday, too. What lots of people do, says Bergur, is to climb a mountain. Last year they even brought a little kiosk to the top by helicopter, so people could eat some sausages up there in the middle of the night.
We settle for the mountain behind the house, past the sheep and the horses, with a great view of the surrounding islands (Eysturoy, Hestur, Koltur and Nólsoy) and lots of wind and fast moving clouds.
One thing is missing before we leave. Klaksvík. “What do you want there?” asks the neighbor. Well, it is the second biggest city of this little country, and it’s pretty far up North, where we haven’t been yet. If we hike from there, we’ll have some new, great views.
So we hitchhike again, and learn some more through that. It seems to be something that makes the older generations happy, but the people of our own age apparently don’t know what these two hippies are doing on the side of the road with their thumbs out. Many people smile, some wave at us, and, as usual, some nice drivers make an apologizing gesture, because their car is already full.
And even at a tiny intersection in the middle of nowhere on Eysturoy, a car stops after fifteen minutes. Klaksvík is the very place where you come out of the tunnel from Eysturoy to Borðoy.
On the other side of the mountain range of this islands lies another village, Árnafjørdur. Until 1963, people had to hike over the mountains to reach it, until another tunnel was finally built. We follow this old path, and from up there, with only sheep and birds as company, once again, we enjoy the best views. 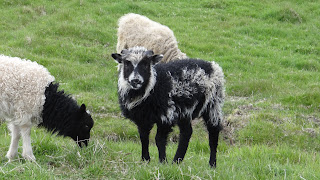 The Faroe Islands have been elected by travel journalists as the most beautiful islands for a reason.
But again, it’s hard to describe. What is so appealing about fog and wind and sheep and mountains covered only with grass and rocks?
I’m not sure, what it is, but it definitely is. Breathtakingly beautiful. 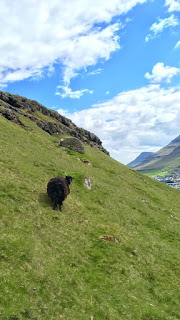 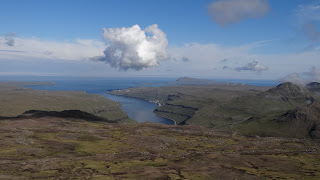 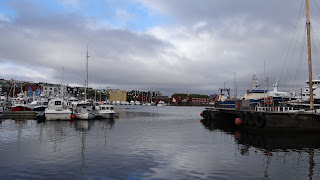