Of course two hours are always two hours. But you have to put it into perspective. While a two hour ride in the US or in Australia may seem like nothing, and someone who lives two hours away in Germany doesn’t live too far away, a two hour train ride in Estonia gets you halfway across the country. So for most people, including me, that is not something you would do on a weekly basis.

But to get away from my work and too many hobbies and in order to not sit at home all weekend thinking about work, I venture to the capital.

Tallinn, I always say, has very nice corners, but it’s way too big for my taste. When I talk about Hanover, where I have lived a total of four years, I say it was quite nice for a big city, you could go anywhere by bike. Turns out, Tallinn (around 426,500 inhabitants) is actually smaller than Hanover (with a population of over 532,000). But Tallinn is not very bike-friendly, as everything in Estonia, spacier than Germany (gardens in the middle of the city, and so on), and it has the vibe of a capital city. I am very glad that my friend Madis comes to pick me up at the train station. The old town (vanalinn) is deserted, even though it is Friday night – there are of course no tourists in Tallinn right now. The old town square (Raekoja plats) looks sad, as all the restaurants and bars there are mainly aimed at tourists. We find a bar hidden in one of the small historical streets, and that too is empty. Madis lives in a suburb half an hour by bus from the center. Here the city vibe is gone, the streets are orange from the fall leaves, and all the houses have backyards. Arnold Rüütel, the former president of Estonia, has just bought a house in the same street as my friend, which is exciting – but the politician has not yet moved here. As I make my way to the city center the next day to meet other friends, Tallinn’s downtown seems to me like the New York Times Square. Everything is so big and modern – if it weren’t for the soviet buildings in between. I try out a new vegan café with one friend, go for a very long walk by the seaside with another and watch the drunk Russians in their Halloween costumes pass by with a third. That is enough of big city vibe for me, I haven’t even visited my usual places, but I cannot wait to be back to calm, cozy Tartu. 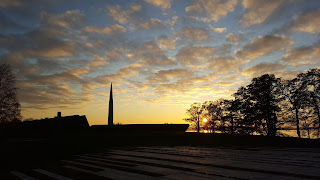 Here, I am both a student and a scientist. Being a PhD student gives you this in-between status that is sometimes good and sometimes confusing. I have to do homework, write a conference abstract, read papers, do statistical models, attend lectures, help out my boss. And while I do all these things for my first project, in which I am working with data from cows that has already been collected, it is now also time to make a detailed plan for my second project. I will investigate basically the same things, only in sheep: how do influences during the neonatal period (in other words: the first month of life) affect the health and growth of the animals during their later life? For that, I will take blood samples (and collect other data) from newborn lambs, observe them during their entire first year of life and analyze the data to see which factors have an influence. The focus is on the innate immune system. Our research group has repeatedly collaborated with an organic sheep farm in the very south of Estonia, so that’s where we’re going: karu perses, as my boss says – in the bear’s butt.

This is the Estonian way of saying “in the middle of nowhere”, but in our case, it has the twist that it is somewhere in Karula national park – so the word “bear” is actually included in the real location. 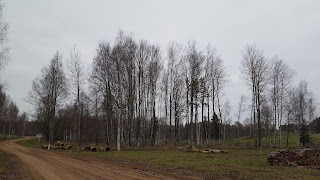 So we drive through the grey, brown and sometimes still orange November landscapes of Southern Estonia, the roads become more hilly, while we talk about living costs in Estonia and Germany (only slightly lower in Estonia), average salaries (much lower in Estonia: an Estonian professor in Veterinary Medicine earns about as much as a first year vet in Germany), the need for a car when one is living in the country side, and, most of the time, about Estonian literature. So my reading list is become longer again. “You need to have a balance, so put away the Intuitive Biostatistics and Veterinary Epidemiology sometimes and pick up an Oskar Luts or Andrus Kivirähk!” he says. Will do, boss! 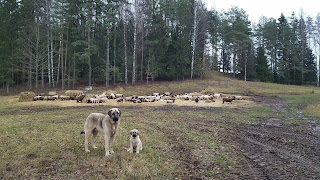 At the end of a forest path at the end of a gravel road a far kilometers outside the biggest village of Karula (which consists of a school and recreational center, a handful of wooden houses and some soviet bloc buildings, but most importantly a little grocery store), we get to the farm. The owner has built everything by himself, after living in the same building as the sheep for the first few years he now has a house for his family and is building a sauna house next to it. Children are playing with the border collies in the “garden” around the house, and the sheep are lifting their heads curiously. As I walk closer, I realize that not all of the sheep are actually sheep: there are some dogs in the same color within the herd. These are to protect them from wolves, the owner explains. These dogs live with the herd 24/7, other than the border collies, and they are supposed to more or less feel like sheep. Wolves have been a big problem for the herd in the past years. Among these guard dogs is also a five month old puppy currently learning not to bite people or sheep, but only wolves. In these short days of November and December, it is breeding time for sheep (so called “short day breeders”), and in April and May the lambs will be born. Around 500, the shepherd expects. “Oh, then we don’t need to take samples from all of them”, we decide. I will be living on the farm for the two busiest week during lambing season, help with the work and collect samples as soon after birth as possible. Then we will come to take additional samples weekly. After showing me around and discussing which samples we need, we start chatting. The dogs seem to love me, the children are excited that a foreigner will be living with them, and the owner is a really cool guy, so I think I will have great time here, even though it will be exhausting. “Why is a professor not looking out the window in the morning?”, the shepherd asks and grins at his old friend. “Because then he wouldn’t have to do anything in the afternoon!” He laughs, and my boss has to agree. “It is a little bit true… I have a very good job. It was a long way to get there, though, a hard way… but as Ina knows, now I do not have to work so hard anymore!” He is, among other things, referring to the fact that he comes to the office after I have already had lunch. 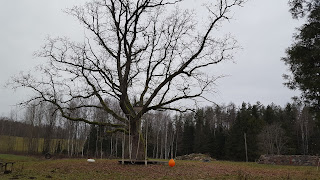 Then follow some nazi jokes that I will not repeat here, but are quite normal in Estonia (I have addressed this issue a few times before), and a discussion about knee surgery for one of the farm’s dogs. It is already dark, I am freezing in my rubber boots despite two pairs of woolen socks, and as much fun as this visit was, I am glad as we finally get back to the warm car. I am really looking forward to this second project, but of course, first I have to finish my first paper!

The following weekend, I go on a third field trip – at least, that’s what Julia, my friend’s girlfriend is calling her birthday party in the invitation: an entire weekend in a forest hut in the middle of nowhere, a bunch of vegans, sauna, good food, good music and interesting discussions. I could not imagine a better way to spend this time! 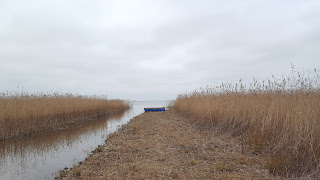 After getting lost on the way, stuck in a mud road (we need to get out of the car and push it at three different locations), we finally reach the house by the shore of Lake Võrtsjärv. What unfolds is a typical Estonian party: unlimited access to (delicious vegan) food, a very slow process of getting to know each other (on Sunday night I still don’t know everybody’s name and profession, and there were only nine of us!), some people are dancing, some people are playing cards, and every once in a while someone comes out of the sauna and walks past everybody naked to get a new beer. Be it inspired by one of the card games or the steam in the sauna, our conversation topics include the harms and benefits of religion, how to address the ego, and ethical questions like animal testing, euthanasia, taking care of severely sick family members, and relationship issues. This is a proper way of getting to know Estonians: names and jobs are not important. Skip the small talk, get naked and dive in straight to the stuff that matters. 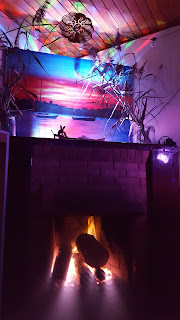