Of vegan vets and Chinese takeaway 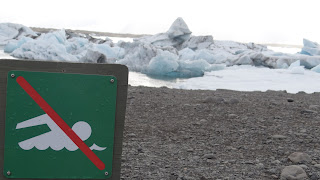 „There are just so many tourists!“ Barbora is complaining again over her lunch. “They stop in the middle of the road, everybody is just driving 90, but they stop for a picture!”
Katrin agrees. “My husband is basically the one responsible for the permits for geological research and he hates tourists, too! They just walk or drive anywhere and destroy the landscapes.”
We bend over our food, but it seems as if the vets and vet nurses don’t count us into this annoying crowd of tourists. “It went from 500 thousand to over four million in just fifteen years. The problem is that it happened too fast” is Hrund’s view, and she immediately asks what we have seen so far. “Oh, the Westfjords are of course the best part of Iceland” she says and grins. “My family is from there.”
Barbora hates not only the stopping cars, but also how difficult it is to find a place to live nowadays. “They build only hotels and all the apartments are turned into Airbnb, so where are we all supposed to live?”
Íris has a special take on Asian tourists, and for her, all Asians are the same. “I used to work downtown, and they ask very stupid questions. They also spend a lot of money and have no idea just how much it really is! And they ask their questions in Chinese. When you don’t understand them, they’ll just say it louder.” She throws her hands up. “I don’t care how loud you say it, I still won’t understand Chinese!”
Finally, when people start making suggestions which public swimming pools we should visit and where we should go on the weekend, Íris presents her best anecdote: “The famous black beach… There are all the warning signs, but just as Asians don’t know how to drive a car in Iceland, they also think that waves are the same everywhere, but here they are actually dangerous… so many Asian tourists drown there that we call it Chinese takeaway.”
So that is where we go.

After a week of cleaning and extracting teeth from cats’ and dogs’ mouths, stitching wounds, watching surgeries and taking care of the patients, we rent are car and drive down the South coast of Iceland. Our car is small and won’t go on any gravel roads, but this is the Ringroad after all. The Route number 1, also sometimes referred to as Iceland’s only highway. 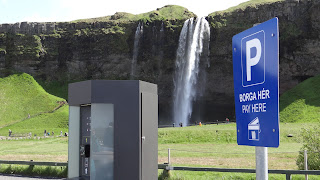 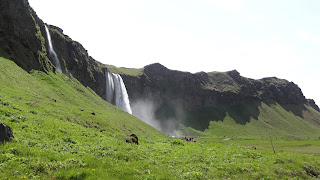 It’s definitely not the lonely Westfjords. At the waterfall Seljalandsfoss we barely find a parking spot. And then we have to pay for it, too. There are toilets and a tiny souvenir shop, and of course a kiosk. We follow the crowd, but it is indeed a beautiful waterfall. We can walk on a path behind it and find out why we brought our raincoats to Iceland!
We skip some more of the tourist hotspots and make it all the way to Jökulsárlón. This lake on the foot of a glacier is famous all over the world, at least since it was in “James Bond 007: Die Another Day”. Icebergs are floating on the lake and slowly towards a very short river and into the sea that is only 500 meters away. 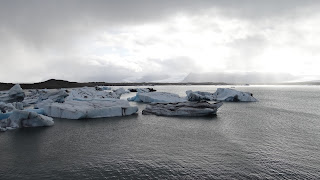 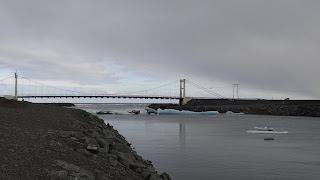 On Sunday morning we make it to the scenic Svartifoss, a waterfall surrounded by black rock in Skaftafell National park. It’s one of the amazing phenomena of nature: as the lava cooled down here, it has formed perfectly hexagonal columns. It looks surreal, and we finish our short hike before the rest of the tourists come. Once again we pass the infamous Eyjafjallajökull and the town Hveragerdi that has so many hot springs that the restaurants advertise their cooking over those instead of stoves. 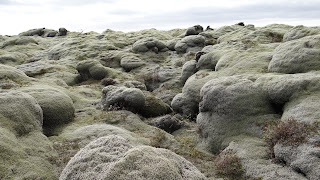 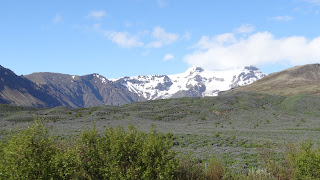 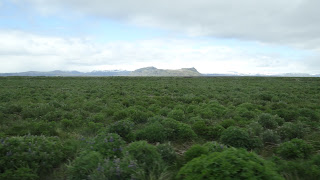 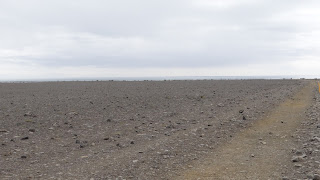 I would love to stop at every mountain, every lava field, and every rocky desert, take in the landscapes and the silence, and take pictures, too, but we wouldn’t ever get anywhere.

As we walk around the beautiful moss covered hills and cross riding paths on our bikes, I suddenly find myself humming a song I remember from middle school. It basically says: If you want to get somewhere, you have to start driving. If you don’t like it, you can always change the direction later. This is basically what Snæfy told me as well. She studied film in Denmark first, the followed her boyfriend to England, where, after working on a farm, she eventually became a vet nurse. This is a typical Icelandic CV, actually.

After a Maine Coon C-section (seven newborn kittens that didn’t look cute yet…), Cavalier King Charles Spaniels with their typical heart problems, French bulldogs with breathing issues (as always… and, as Tove says: “I’ve never seen a French bulldog with a normal spine, either”), cat castrations in a shelter and two diabetic cats, we manage to visit two of the public swimming pools that were recommended to us by the vets. The Nautholsvik is not just for swimming, it’s quite the tourist attraction, too. And it’s free. There are two geothermally heated hot pots on the coast, protected from the wind, facing the sun in the South, planes from the very close Reykjavík airport passing over our heads. The water from the pools also heats the small bay in the fjord. So even I can swim in the sea in Iceland! But only in this small bay. And I have to run on the way back to the shower, as the air is only around twelve degrees. There are, though, people swimming in the actual fjord, too. They wear hats and neoprene gloves and shoes, but most of them normal bathing suits. Those are the really tough people! 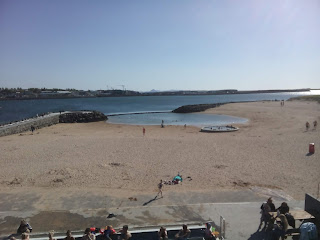 Ólöf shows us some x-rays and ultrasound pictures and videos of common heart problems, and everyone else in the hospital is also trying to give us even more to do and see in the last few days. It’s only been two weeks and we only got a glimpse of Iceland. But: when you work with the locals, you’ll always learn more about a country than when you follow the tourist crowd. And: I’ve learned a lot about small animal medicine.

I am not sure if this text is about sightseeing, about tourism, or about working with animals.
But whatever it is about, I want to say a few things about being vegan in Iceland as well.
I’ve read on a couple of blogs that it’s pretty much impossible, especially outside the capital, to be vegan.
That’s absolutely not true.
What definitely isn’t easy, is to avoid waste. There used to be package-free store in Reykjavík, but it closed very soon, and although you can get bread in your own bag from the bakeries and some veggies without plastic packages in the supermarkets, zero-waste is something you won’t achieve here.


But being vegan? Hell, it’s so easy! If you are vegan for climate reasons, then this is not the place. Most of the food is imported, so fish and sheep would be the most climate-friendly food. Then there are potatoes and barley, and the Icelandic greenhouses are heated geothermally, but still. If it’s for the animals or whatever reasons – go ahead. HappyCow doesn’t list places outside of Reykjavík, and it’s true that there are only two vegan restaurants. They are both in Reykjavík, and not far from each other: Gló vegan and Veganaes. But the Icelandic vegan society has their own app that lists all restaurants that have at least one vegan dish on their menu. And there is A LOT of them! I even gave up checking the app after a while, as almost all restaurants have something that is either already marked as vegan, or they can veganize something. And when you cook, some of the supermarkets are vegan paradise. There is Oumph, a mock meat that beats tofu and seitan by miles, there is vegan ice cream, vegan chocolate spread, oat and soy milk, vegan cream cheese… whatever you could wish for.
So being vegan in Iceland is super easy nowadays.
Oh, did I mention the Sirius chocolate? Even the 45% cocoa bars are vegan. It’s Icelandic chocolate, fair trade cocoa, palm oil free, and the best: They wrap it only in paper, three bars in one. 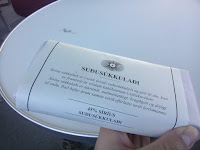 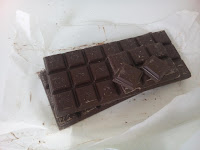 https://www.facebook.com/veganaesRVK/ (I fell in love with this place, mostly because it reminds me of my favorite bar in Tartu…they have a bar, great vegan food, and live bands)

When we leave the Dýraspítallin on our last day, the sun is still shining. Since we had to move downtown for the last two days, Barbora has offered us to drive us home. I hold my face into the sun. My fingers are itching, I need to write. And my bones are tingling, too: the next adventure is waiting. It will start on a tiny airport with a short and not exactly even runway, of a country with 51 000 inhabitants, around 40% of which live in the capital… 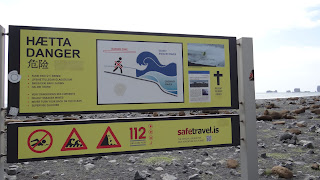 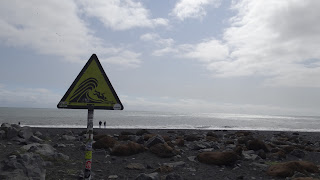 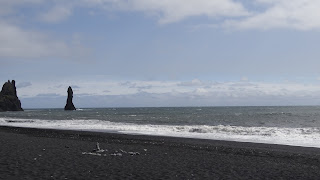