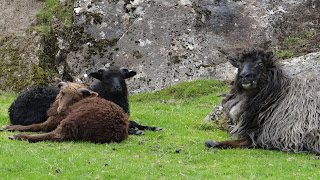 18 islands. Where villages sometimes consist of only one or two houses and where grass grows on the roofs. And sheep are everywhere. That’s what the name means after all: Faroe islands – the sheep islands.
Streymoy is the biggest one, the one with most of the population, and the capital Tórshavn. East of it lies Vágar, where the international airport is located. Thanks to tunnels through mountains and under the sea, it is easy nowadays to go from one island to the other by car or bus. It is also on Vágar that we realize: the best way to explore this country is by hitchhiking.
“Oh, you’re working in the animal clinic in Tórshavn?” our current driver repeats. “Then you must know Kristina! She’s married to my wife’s nephew.”
Day three and we’re already in the game of “everybody knows each other”. 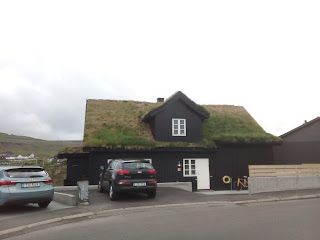 Why are we here, on these islands where nothing grows but grass for the sheep, potatoes and rhubarb, where they have 200 days of rain each year and the hills always covered in fog?

For another internship, of course. Bergur, our boss and owner of the Djóralæknatænastan, is also our host for these two weeks. Only one of the three children lives with the parents, so he has space for us, he said. And he even picked us up from the bus station when we arrived. We recognized each other immediately, of course, we’ve been Facebook-friends for a year. After he had introduced us to his wife and daughter, we all went to the city festival together. Small events are taking place at every corner. The old printing house now features young artists, and behind the printing press, a family is having dinner, it seems to be their dining room right there. And as we leave the old bookstore, that has been there basically always and now also houses a popular café, through the back door, we area running into a choir.


The Faroese are probably even more musical than the Icelanders. 13,000 soul Tórshavn has 30 official choirs and the little nation prides itself with its own symphony orchestra.
On our second weekend, we are invited to two musical events: The neighbor’s daughter Kristina is coming home from studying music in Denmark and this calls for a party. Her friends, “Die Færøische Polkaband“ give a little concert in the living room. Saturday night we get to go to the Northern house (Norðurlandahúsið), where the Tórshavna Big Band is performing – Kristina is one of the saxophonists.

In our free time, we explore the islands, always following the sun. On this Saturday, there is only one sunny place on Streymoy: Vestmanna. Where we happened to have gone. In Tórshavn, the fog is so dense that one can barely see to the next house, and the mountains we had planned to conquer today, are hidden, too. That’s the East wind, Mildrid, Bergur’s wife says. If the wind comes from the North, it is clear in Tórshavn.
We also visit the National Museum of the Faroes, where old whale hunting vessels are displayed, and an old farm house is preserved. We take our shoes off at the entrance and walk through the house. The woman who works there is happy to engage in a conversation. Modern roofs need to be strengthened first if they are to be turned into the traditional grass roofs, she tells us. The grass is so heavy. Why even put grass on the roof? “Then you can’t hear the rain inside.”

We switch to electricity. The islands are so far from everything else that all the power has to be produced here. Most of it is water energy, but more and more wind turbines are being put up.
When we have put our shoes on again, the lady is back to knitting her purple scarf.
Knitting could as well be the nation sport. Officially, it’s rowing, but there is no bus without a passenger who is knitting. No wool store without the salesperson working on some socks or a pullover behind the counter (and there are a lot of wool stores). Soccer is also a popular hobby. We can see the national stadium from the kitchen window. Bergur is often watching the games during dinner, and we are told that the neighbor, who by profession works on a cargo ship and comes by for dinner a couple of times a week, sometimes acts as security guy there. The big game Faroes: Spain ends 1:4, but the Faroese fans are cheering. The Spanish team is leaving the ground without big smiles. For the Faroese it only counts that they played the Spanish. And it could have been worse.

The busses inside Tórshavn are for free, and the long distance busses can be paid by card. The islands are connected by tunnels or with ferries, and there even is regular helicopter traffic. We take the boat to Nólsoy, where they have more sun than in the capital. There is a small village with colorful houses, a lighthouse, and a mountain where the sheep are grazing.
Of course we also visit the most popular tourist attractions in the Faroes. The government buildings, the harbor, and on the island of Vágar the waterfall at Gásadalur. 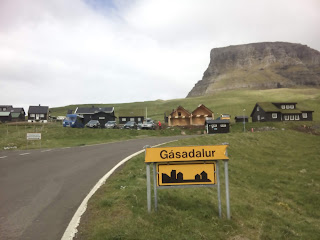 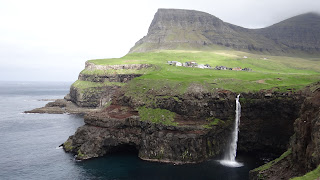 On the way back to Streymoy, Martin, the artist who picked us up from the side of the road, tells us that we definitely have to try whale meat. Dried one first, but also the fresh one. This meat is more for special occasions, but apparently very tasty. Of course, I don’t mention that I’m vegan. He is upset about all the fake news that are going around in other countries. Most of the whales that are caught, he says, have come so close to the shore, that something must be wrong with them anyway. He sees this as something comparable to euthanasia of dogs with end-stage cancer. About ten times per year, whales are chased into the bays, 20 to 100 of them each time. So every year, that’s from 200 up to 1000 whales who feed the population and are not being exported.

Neither whales nor sheep are regular patients at our workplace. Most of the sheep farmers don’t have the money to have their animals treated here, so they just get free consultations over the phone. The methods have to be different on these islands. Kristina (the vet, not the saxophone player) says that she has the farmers measure the temperature, listen to heart and lungs and the farmers are really good at assessing feces. If it takes them a three hour ferry ride to get to the vet, they just can’t do it every time an animals is sick. So they have to manage over the phone.
On Tuesday, we go to the island Sandoy, to dehorn calves and perform pregnancy checks in cows. We take the ferry at 7.30 and even get to drive around a little bit to enjoy the views after visiting the five farms before the 2 pm ferry that brings us back.
“Do they get foot trimmings, too?” I have to ask after seeing the overgrown hooves of some of the cows. They are still held in tie-stalls and can’t walk around in the stable. In Denmark, these cows are granted a minimal time on the grass, outside, in the summer months. But on the Faroes, the ground is too soft to support them. The rules can’t be applied, and in stables, the hooves always suffer more than on natural ground of course.
“Yes, sure” Bergur replies. “The foot trimming guy was supposed to come on the same ferry as we, but there was no more space, so he has to wait for the next one.”

After the cows come the cats and dogs. Vaccinations, deworming, treating diarrhea, cutting mails. Daily life in a vet practice in any city. Compared to the German hospitals, it’s not too busy, but we interns get to do so much. By the end of the week we have gotten into the routine of examining the dogs, giving them their shot and deworming tablet. And if there are no patients, we practice stitching on bananas, are shown YouTube videos of the vets’ relatives who are musicians, or have them show us places worth visiting on the big maps of the islands on the wall. Kristina suggests we go to Mykines, an island in the South where a colony of puffins lives.
But both the ferry and the helicopter tickets are sold out. 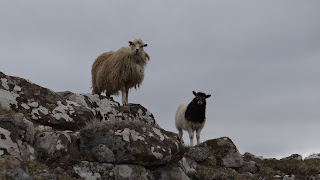