We live in 110 Reykjavík 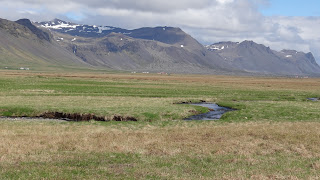 The sun in my face and wind in my ears, I take a deep breath. Do I taste salt? Smell the sea or the moss? I can’t really tell what’s in the air, to me it is simply: clean. Clear. Unbelievable that I was breathing in the Thai air full of smog just one month ago!

It’s also quiet. A car many kilometers away, and we leave the spot when a couple of tourists start talking. I take another deep breath before I get back into the car. This is Iceland. Lava fields and gravel. Moss on rocks. Mountains and the sea. Clean air and cold wind. Snow and sleeping trolls.
After the ferry to the Western Fjords we are off to Látrabjarg, the westernmost point of Europe. But is it really? After all, we are standing on the North American tectonic plate. Anyway, we can watch thousands of seagulls and a couple of early puffins here and imagine Greenland behind the clouds on the horizon. The sun is still shining, it’s only nine p.m. 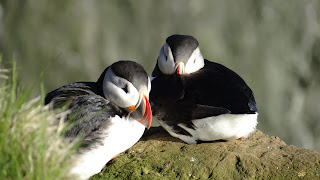 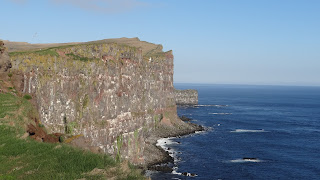 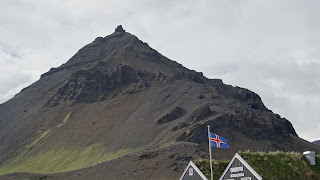 We spend the night in a guesthouse in Patreksfjördur that feels very much like Iceland, too. From the dining room we have a wonderful view over the fjord, all the guests are introducing themselves with first names and we all walk through the house in socks.
The gravel roads along the many fjords bring us back south the next day. More houses now, more cars, more people. Gone is the silence of the countryside. One last night by a fjord, where we can watch the sun set behind the sea while we lie in a hot pot at half past eleven. Afterwards, as we’ve learned, it still isn’t dark.

Then we are in Reykjavík, the “smoke bay”. Half of Iceland’s population lives in the capital, but that doesn’t make it a really big city.
For the next two weeks, we will be living in an Airbnb in one of the suburbs where every house looks exactly the same, so that even on our second day we get lost in the street parallel to ours.
We are working in an animal clinic a ten minute bike ride from there. By bike, it’s about 45 minutes to the city center, along a river, where the lanes for pedestrians, bikes, and horseback riding are well organized, the lupines blossom along the road in purple, and the dandelions on tiny islands in the river in yellow. The sun has been shining for ten days straight, it’s starting to make me suspicious.
The hospital treats mainly dogs and cats, but two hours per day the walk-in horse clinic is open as well. The owners usually use this time of the year to have their horses checked up before they go to the mountains for the summer. So most of them ride here or literally walk in from the horse farm across the street. We see slight lamenesses, pregnancy checks and uncomplicated tooth treatments. Icelandic horses are sturdier than other breeds, and they are kept in an appropriate way on big fields with rocks, hills, and natural waterways. 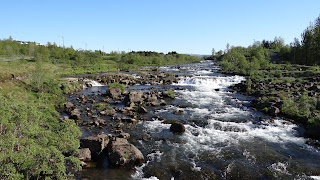 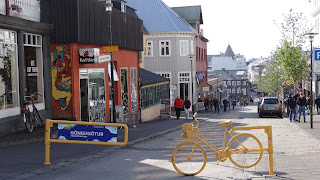 Inside Reykjavík, life takes place on Laugavegur, one of these famous streets that are heated with geothermal energy during the winter to prevent ice. All the bars and cafés are here, and in between, of course, souvenir shops. We sit on the rooftop terrace of Café Babalú that one of the vet nurses recommended. It’s a yellow building with a blue roof and a colorful, chaotic interior. From here, we can tell European tourists apart from Americans, and spot the Icelanders with their creative haircuts and colorful, funky outfits. In the evenings, people drive down this one-way street again and again in their cars, this is a much cheaper way to enjoy a Friday night than drinking in the bars, and apparently, a regular activity for young people. 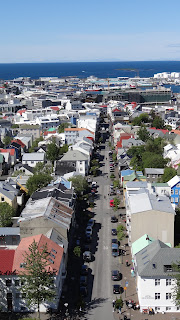 Apart from the Hallgrímskirkja, that serves as landmark from everywhere, towering on a hill, we have two major sights on our list: the phallus museum, and Villi’s cinema.
Yes, there is a penis museum in Reykjavík. To be honest, for vet students it’s not too strange and impressing. It is the biggest collection of different penises, but I think that our university’s Institute of Anatomy could probably display a similarly big collection if they just organized their basement. But it is, still, a museum full of dried or formalin-preserved penises from all kinds of animal species. There is, for example, the sperm whale penises, as big as me. Or the one from an elf, called “hidden man” in Iceland, and just like not everyone can see the hidden people, not everyone can see this penis. To me, the jar looks empty. There is even a human penis, accompanied by a certificate of donation. More of these letters hang on the walls: there are apparently a lot of men across the world who want to donate their organ to this museum after their death. 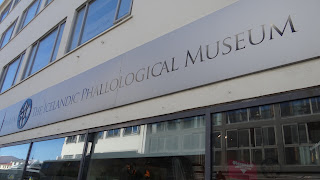 It was my mother who recommended the Red Rock Cinema. Villi Knudsen shows his movies here himself every day of the year, and she said he was already old when she saw them over twenty years ago. Today, Villi is 75 years old, walks very slowly and doesn’t hear so well anymore. “So, you want a little Vorführung?” he asks us in a mixture of German and English that he will use throughout the next one and a half hours. We are the only guests for the three p.m. screening and before we go in, he comments on my hair: “I used to have rote Haare, too!” He introduces himself and tells us his story, standing next to his old cameras that he used in the 70s and 80s to get close to volcanoes. He took this hobby of filming volcanic eruptions from a dangerously close distance from his father, to whose picture he points. When he was thirteen, he helped for the first time, and when the Eyjafjallajökull erupted spectacularly in 2010, he was there again. Next to him between the cameras sits the cat Mokha. “She likes tourists” he said, and after climbing over the backs of the chairs, she spends the rest of the show on my lap. Villi starts the movie, in which we see him wait for eruptions at glaciers, how the helicopter goes very, very close to the craters, how the lave pours into the sea and how one volcano destroys an entire village on Heimaey in 1973.
Although it’s unlikely that Villi remembers my mother, he asks how she’s doing and what she does now, and has me greet her. 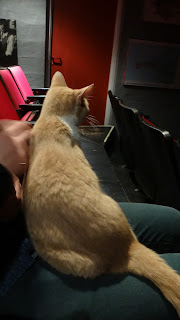