The four-euro-cucumber: what I learned about the Estonian food industry 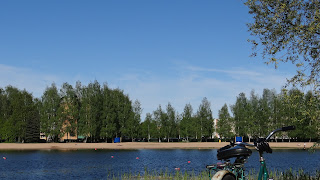 People often ask me what I love about Estonia and why I’m studying the language. It makes sense to learn the language of a country where you spend so much time, doesn’t it? But to actually answer the second question I often compare it to German: When two Germans talk about the weather, it almost sounds like they’re fighting. If two Estonians fight, it sounds like they are talking about the nice weather (or they don’t talk to each other at all, of course).
In this blog, I must have mentioned what I love about Estonia so many times: the snow on the sandy beach, the bogs and forests, how I can go out for a beer with my teacher and we exchange news about mutual friends, how hierarchy is secondary here. That it only takes us two cars when we hitchhike from Tartu to Tõrva and Madis happens to have a connection to both of the drivers. I love how the love for nature and the love for modern technology are not contradicting each other. I love the rye bread.

And of course, how famous musicians sit next to normal people in the audience, listening to newcomer bands and poets.
And so on.
The second question I frequently get, be it at the literature festival, in the bar, or at work: “How long have you been in Estonia?” 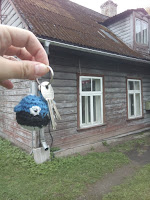 That’s not so easy to answer.
Usually, this conversation takes place in Estonian, so answering with “two weeks” would be a bit strange.
But “two and a half years” is also wrong, because I have been away so much, I don’t live here, even though I have the keys to an apartment.
It must be seven months or so in total now. It seems longer.
I have to talk about ERASMUS, Viljandi Folk, and midsummer, and tell the people that my best friend works for Vikerraadio. My supervisors eventually realize that I’m not studying chemistry, but veterinary medicine. Then we turn back to preparing our sample for the analysis. And at three I’m already off.

So working times are really nice, and the days are long and sunny. Time to explore some corners of Tartu I haven’t seen yet. I cycle up and down the sides of the river Emajõgi, where students sit with cans of beer, old men fish, and others have a barbeque. Some just lie in the sun, some even take a swim already. Just a short distance from the city center it feels like I’m far out in the countryside. I don’t meet anyone for ten minutes, I am surrounded by trees and flowers, and sometimes a boat floats by. I even discover a little cave in the sandstone. 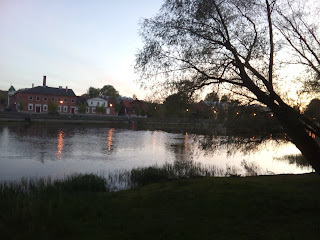 There used to be a construction site at Küüni street, it’s now finished: Küüni 7 houses co-working space and hipster cafés that of course offer vegan food and bamboo straws. And free Wi-Fi, but that’s not really worth mentioning, that’s everywhere.
My favorite food place, on the other hand, had to close.
For the first time I peek inside the main university’s library, whose reconstruction had been paused in 2016 due to financial issues. It has finally reopened. 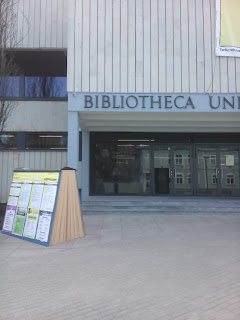 Of course I always visit my regular bar Möku, to meet old and new friends. Mihkel, for example, with whom I’ve never had a conversation that had more than ten sentences – but we are always really happy to see each other.
My accent in Estonian seems to be convincing, too. While I wait for my drink, a man sitting at the bar starts a conversation, but quite soon I have to tell him that I don’t understand him. He simply repeats what he just said. “No, no, I don’t speak Estonian that well!”, I explain.
But a few minutes later, the same thing happens again. “Sorry, I didn’t understand this.”
He repeats the sentence with too many vowels and complicated endings.
“I still don’t speak Estonian that well.”
“Wait, that was serious?”
“Of course, what did you think?”
“I thought you were joking, you speak it so well!”
And Martin, a famous actor, sits in a corner and looks at me, half asking, half already answering. “Yes, we’ve met before”, I confirm. “You offered me your weird cherry beer” I remind him of our last encounter. It’s three in the morning by now, I had been meaning to leave for two hours, but this is how it goes in a place where everyone knows each other… Soon, I tell Martin all about my work at the food lab, especially the MALDI, that I saw in action today (or rather: yesterday…): “And so without doing all this work that normally takes hours and days to grow the bacteria, you just put it in there, and after a few seconds, it tells you: This is Escherichia coli, or this is Salmonella, but then you have to find out which subtype by yourself, but it’s really fascinating…” And then, apologetically, I add: “I’m a scientist.” The actor can’t quite see what is so great about this machine. 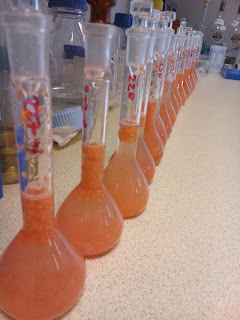 The internship has indeed become more interesting every day, and in the end I got to do ELISA tests (to detect antibodies against specific viruses), preparations for sugar analyses and Salmonella subtype detections pretty much by myself.
Laboratory work always means a lot of waiting. You prepare a sample, then incubate it for an hour at 37°C (incubate means letting it stand around, but it sounds more sophisticated…), you add a marker or a reagent and wait for another hour, you filter it (and wait), you put it into the machine that does the actual measuring. The MALDI may need only a few seconds, but PCR and HPLC need hours, sometimes they work over night. Oh, how I love these abbreviations! Using terms like HPLC makes you feels smart, especially when you know that it stands for High Pressure Liquid Chromatograph and even more when you know what that means.
All the waiting gives you time to talk about the management of the African Swine Fever in the Baltics, about rabies vaccinations along the border to Russia, and, most importantly (since this is a food lab) the Estonian food industry.
In the beginning almost everything is in English, but I get better every day, until, on the last day, everything is in Estonian, and if I don’t understand, they either rephrase it or simply show me what they mean.
Many of the foods that we test have been imported: lactose free yogurt from Finland, vodka from Russia, superfoods from Italy. Estonia is importing lots of foods, even though in many cases it’s not necessary (any more). Hanno from the instrumental chemistry department tells me: The cucumber from Estonia will cost four euros, and the one from Spain only two. And as long as people pay this much, it won’t change. I mean, they pay four euros for a cucumber, can you imagine that?” But as long as people buy the imported vegetables, that won’t change either, will it? There are also onions from Poland and potatoes from Latvia, both vegetables have always been growing really well in Estonia.


It is even more extreme when it comes to organic food. My loyalty card at Biomarket is still valid, and I’m standing in front of the shelf with the spices. Most of them are imported from Germany (although they were only packaged there, too…). Finally, I see chili that was grown on Saaremaa. In a glass jar instead of a plastic bag, too. Six euros for those 50 grams. I buy it anyway. Next the plant milk. The one with the shortest transportation is from Sweden. Apart from Germany and Sweden, Italy and Spain seem to be the main countries from which Estonia imports organic food. Peanut butter, two glasses of the same size. The one from Germany costs 4,55€. The one made in Estonia 7,89€. And the new vegan ice cream, made by LA MUU, Estonia’s first organic ice cream company, is 7,95€ for only 400 grams.
But still, I’m simply happy that I can buy so many groceries in jars that I can later reuse. In the bulk section at Biomarket and Maximarket, for example. Lentils, granola, nuts and dries fruits can easily be bought here without any plastic packaging.
And at Muhu Pagar, my favorite bakery, I get the dark bread into my own cotton bag. It’s still warm from the oven. On the way back to my bike, I already have a bite.
Of course, we also talk about dairy farms and poultry, about BSE, Salmonella and gluten intolerance.
And coming home from work, these conversations continue, because I’m living with two journalists. Karoliina has just finished her story about food waste. “We went dumpster diving last night. It’s crazy what we found in the bins behind KONSUM. There are these bags of oranges, and if one goes bad, they throw the whole bag away. There was also salad with an expiration date four or five days in the future! This was really an eye-opening experience.”

On my last day at work, I bring a cake and attach a little note: “This cake is vegan, lactose free, but with lots of gluten. A microbiological test was not performed. Please do the sensory analysis.”
It’s probably the first time in my life that I really look at the price tags of food in the store. But I never found Hanno’s four-euro-cucumber. 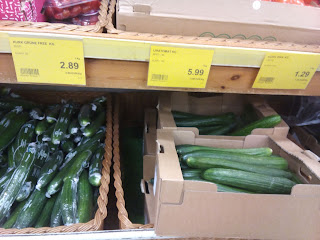