The Sound of Silence: A Road Trip in Western Iceland 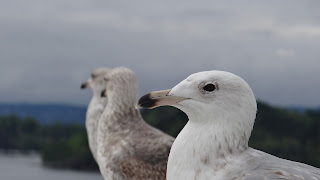 After four months of thinking: “I wish someone would be walking by my side with whom I could share this“, I’m realizing that I’m actually a good solo traveler, and prefer to share my experiences with new friends or better even: only afterwards. I find myself walking away from people now when the view is best, instead of getting closer to the others. I find myself being annoyed by remarks about the scenery, and the voices of people, and I don’t even want to make comments myself. Look, there is a lonely sheep, so far from the herd, only followed by her two lambs. Look at the sleeping trolls in the hills.
We are four now, and we have a car, and this makes us super flexible. Actually, I love everything about it. There are just these moments, on a beach that’s all black, or by a waterfall, or somewhere in the middle of nowhere, when I need the silence and some space to myself.
After a night in Oslo, we all met at Keflavik airport, Iceland.
The Icelanders want us to say “in” not “on” Iceland. This is not just an island, it’s a country.
Our first night here we spend in a bus. 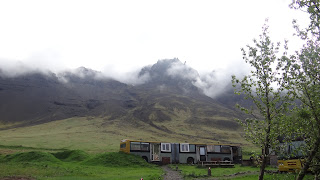 Wait, didn’t I just say we had a car?
That’s right, and we took the car to get to the bus.
The bus is very old and doesn’t drive anymore. Instead, it has beds, a little kitchen, a comfortable dining area and central heating – it’s a hotel now. Two busses are standing on the compound already; that makes four little apartments, the bathrooms are in an extra building. A third bus, old, ugly, with a bad graffiti, is waiting in the parking lot to be remodeled.
The next morning, we go North, slowly towards Snaefellsnaess, past the crowds at Geysir and his little brother Strokkur, and at the Thingvallavatn, the cleft between the North American and Eurasian tectonic plates, and to the cave. 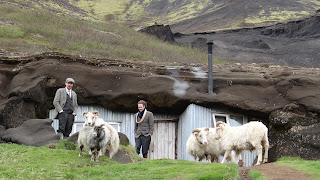 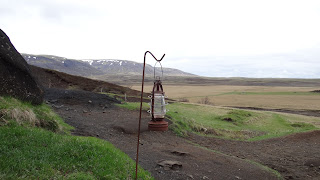 Two young guys have dressed up a bit and tell us how in the late 20th century normal village people ended up living in a cave. They tell the stories of sheep, potatoes and hidden people wonderfully, how little Ragnir was born in the cave during a snowstorm in 1919, and how the Danish king had coffee here. They are repeating history, they say, by having some sheep out here, growing potatoes, and selling cakes and coffee to tourists. Only the old waffle iron can’t be used anymore, because of the strict health regulations, they say, but claim that they make them for themselves quite often. In 1910, after the cave had been used as shelter by shepherds and travelers for centuries, a young couple moved in, Indriði Guðmundsson and Guðrún Kolbeinsdóttir, who built the cave at Laugarvatn into quite a nice house. They had sheep outside and potatoes in the garden, and their place was just as good as any farm in the area. They lived there for eleven months. The next family, Jón Þorvarðsson and Vigdís Helgadóttir moved in in 1918 and stayed for four years. The cave now looks exactly as it did then, only the walls had to be moved a bit backwards, as some of the natural roof had fallen off.


Thingvallavatn was where the original stately affairs had taken place, the Almannagjá is that cleft between the two continental plates and has this name (all men’s ravine) as it used to fit all the people of Iceland.
On our second day, we have horses in the backyard, so to say, so of course, we have to go ride them in the morning.
When I woke up for a second at four thirty this morning, it was light outside. When I went to bed at eleven thirty in the evening, the same light was there. There is no real night in Iceland in May.
It’s a farmstay somewhere in the countryside in a beautiful valley, and called Oddsstađir. We pass a waterfall on horseback, let the animals climb the mountain for us and enjoy both the view and the Tölt (this gait that the Icelandic horses are famous for) at best conditions. Actually, we have sun all the time. 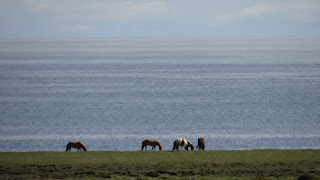 Next comes the peninsula Snaefaellsness with its glacier Snaefellsjökull, black beaches, the fisher’s town Olafsvík, the breathtaking lake Sandkluftvatn where we meet nobody, only silence. We drive past swans and sheep with lambs, past half wild horses, mountains, lava fields, rocks covered with moss, snow spots, and lots and lots of beautiful rivers, streams, and waterfalls. 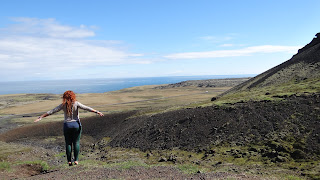 We eat more expensive food than ever before, drive a bigger jeep that ever before and do some crazy stuff. For example, after climbing into a narrow gulch, I take off my shoes: it is so warm. Almost 15 degrees – time to walk barefoot and feel the rocks and the moss and the grass underneath my feet.
We also climb a dead volcano, the Grábrok, a three thousand year old crater, where again, it is so quiet that our own footsteps seem to disturb the peace. And well, there is a single car near the horizon that we can hear, and an American couple.
We even find our own natural little hot pot. Not far from the road, the snow covered mountaintops in the background, some crooked and small trees around, we sit in one of the many hot springs and let the sun shine on our faces. I had expected to be freezing a lot afterwards, but the hot sulfuric water has warmed us up so much that we even take a little walk on the mountain in bathing suits before we return to the car. 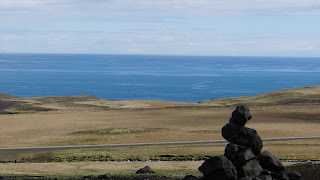 But to make this a real roadtrip, it’s not only necessary to eat crappy breakfast with crackers from the gas station, but also we have to move on to the next accommodation. So, we take a ferry to the Western Fjords. On the way, I get the chance to become active within the Icelandic vegan community: they have their own app that lists all restaurants that have vegan options on the menu – well, not all of them, so I can add Narfeyrarstofa in Stykkishólmur. 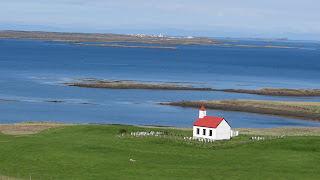 It’s hard to describe the silence and the breathtaking views, the landscapes that fir the soundtrack of Game of Thrones as well as Ólafur Arnalds’ epic music and that make you think of elves and trolls at every corner. The many waterfalls that you would think would even become normal after a while, but they don’t… Even the pictures can’t really show you how Iceland is. I’ll try to describe better next time, but we just found another hot pot, so I gotta go! 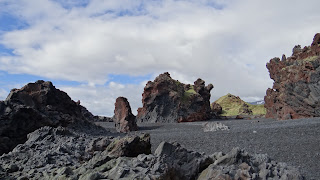 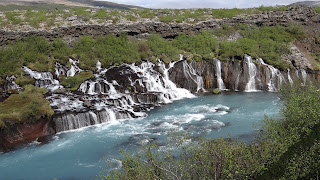