Life in Estonia, part 3: I think I am a scientist now 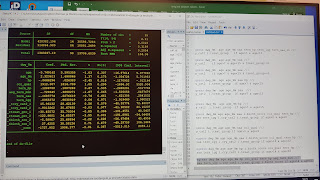 It’s a Finnish student again. I realize that there is actually no reason why anybody should knock on this door to see me – the only two people who need to communicate with me at work are Tarmo with whom I use an instant messenger app and Toomas, who sits next to me most of the time.

After stating the obvious (“Toomas ei ole” – “He’s not here”) she asks in English: “Do you know when he’ll be back?”

“He usually comes in at twelve.”

Of course she is back five past twelve. Only after she has closed the door again do I realize that I didn’t actually have to apologize for my boss not being here. He tends to show up in the office by the time I’m halfway through my day already. Then I get to listen to his online lectures and the students who have technical problems while he’s out getting more coffee, and we chat while the students are doing group works and he has muted himself. I should actually be working, but what can you do? Every once in a while he turns around to me and asks a question that seemingly comes out of nowhere. Do I think we have space enough for a third desk in here? Then the new PhD student could also work here. Would I like an iPad to be able to read articles at home? How about an external hard drive for backups? And how is advertisement pronounced correctly? Do I think he is a bad teacher? And by the way, what do the Covid-19 safety measurements look like in Germany? Oh, and have I heard of the hole in the MS Estonia? (For those of you who are interested, here are two articles in English: https://news.postimees.ee/7072894/documentary-crew-finds-big-hole-in-m-s-estonia-ferry-wreck and https://news.postimees.ee/7073877/head-of-expert-committee-coverup-without-end). 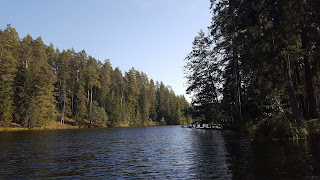 In German we use the term “Doktorvater” which means “father of the doctoral student” when we refer to the supervisor. In Toomas’ case, this term fits perfectly. He is expecting a lot, both from his students in the courses and from me, but he also cares a lot, explains things patiently, and whenever I have a question, I can just ask it; if I need anything, he will get it. One evening we sit in the laboratory sorting DNA samples that will be sent to Finland for analysis. It’s already dark when we finish, and my bike has no light, so he drives me home. Not that it would have mattered, really, on a bike you are being treated like a pedestrian most of the time, so as long as I have a reflector, all is fine. 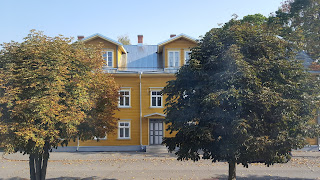 Most of his ideas pop up when I start to loose concentration and start thinking about calling it a day.

“I have a plan, we have the money;  we only need the test kits for the cytokines.”

I look up from the statistical program.

“We should measure IF-ɣ and TNFα in the calves‘ blood, but the test kits we used last time weren’t sensitive enough.“

I’m not sure how to react to this. Yes, the cytokines play a role in the synthesis of the proteins that I am investigating in my first paper. But including them as well would make it even more complex than it already is.

“Could you check which tests were used in the past years with calves?”

This sounds like an easy task, but anyone who has done a literature review knows it is not. In gigantic databanks I have to search for articles that measured these cytokines in calf serum (or at least cow serum). Usually, you see only the summary, the so called abstract. From this, you can determine, if the article will be relevant for your research and find the full text version. Scroll down to the part that most readers will skip: Materials and Methods. And hope that the authors did not just write “commercially available ELISA kits were used” but actually mention the manufacturer.

I had just been about to shut down my computer, so internally, I sigh deeply. I have been working for eight hours without a real break.

“Sure. I’ll write you a list with the articles and the kits they used.”

But I also decide right there that I will only get started today. It actually takes me an entire day to go through the most relevant articles.

After a few minutes he turns to me again. “How do you handle your nutrition?”

I am not sure what he means by that question. “Umm… I eat when I’m hungry.”

“I just ask, because I never see you eat. And as your supervisor I am also responsible for your well-being.”

I try very hard not to look at the candy bag in my trash bin. “I try to.” And quickly, as I know this will be the next question, I add: “I also take vitamin D.” Estonians are very mindful of this issue, as the winters are long and dark.

“And since you walk a lot, you also get enough exercise, right?”

“Of course. I also do yoga and go climbing once or twice a week.”

He seems content, but I decide to bring some extra food the next day to prove to him that I eat.

Then I leave and go to my regular yoga class. 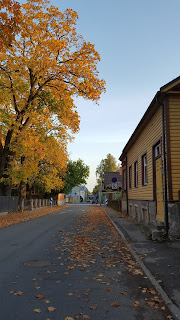 The climbing wall is small, but very much to the point. It is hidden in the back corner of the main university’s sports building and a wall for real problem-solvers. When you have few space, you need to make the routes harder. Half of the climbers of Tartu seem to be Russians who have no problem speaking English with me as I reach the limits of my Estonian skills. I feel like I have never climbed before and have three people cheer me on as I fight my way up the wall with newly acquired techniques. 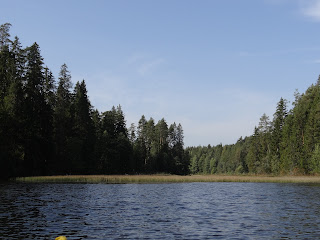 And when I’m not busy, I enjoy the last warm sunrays of fall by riding my bike to the edges of Tartu, walking around Karlova or going on a canoeing trip with the International Club of our university. And on one of those clear nights in which you can see the stars over Tartu, an old friend gives me a sightseeing tour on his motorcycle.

Annelinn is Tartu’s biggest district, both in size and population – about 27% of Tartu’s inhabitants live in Annelinn’s block buildings form the 1970s. Behind the orange-grey five-story buildings, the greenhouses of the city bathe the moon in a similar orange light. I find these soviet districts of Estonia strangely romantic and fascinating, and I have even held a presentation about them once.


So while I live through the ups and downs of becoming a scientist, the falling leaves turn the sidewalks of Tartu yellow, the chestnuts in front of our house finally fall down, and the nights are starting to get colder. 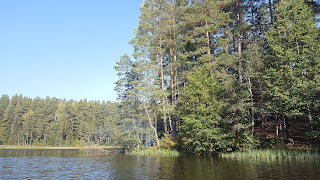