A day at the Elephant Village 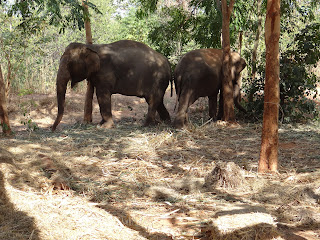 Fortunately, the gecko started screaming before I went to bed, otherwise it would have probably scared me. But this way, I am reminded what I read about these little fellows that usually stick to the ceiling or the walls: They are much louder than you would think! Plus, they are very useful to have in the bedroom, because they eat the mosquitoes that would otherwise bother me. 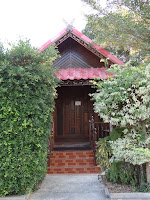 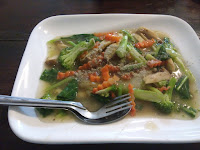 I’m staying in a little bungalow on stilts (actually, it’s pretty spacious for a low budget accommodation), the light is falling through the small gaps in the wooden floor and walls, and we don’t always have electricity. It is exactly as I pictured life in the Southeast Asian province. This living arrangement falls under the definition of a “Homestay”, a couple of bungalows basically in a family’s backyard. It is a good way to support the locals. There is free drinking water and the family runs a small convenience store. For breakfast, lunch, and dinner, I join Nissa, John, Kan and the Mexican zoo vets, because the Homestay offers no cooked food. This way, Nissa can communicate with the cooks about my vegan diet, as I don’t meet anyone apart from the vets who speaks English and it’s not so easy to explain “vegan”. It’s not a common concept out here. There is “jay”, that has its origin in the Jain religion, but it doesn’t only exclude animal products, but also plants that grow underground, and I really love onions, garlic, and ginger, so we have to go with “no meat, no egg, no fish sauce, no dairy, no seafood…” I really need to learn some Thai!

Ban Tha Klang holds the nickname “Elephant Village” and on our way to the breakfast place we pass many elephants underneath their small roofs that protect them from the sun. They are chained to a post with one or two feet and show stereotypical behaviors (see: The Surin Project).
At nine, we arrive at the Elephant Clinic’s compound, where the Golden Triangle Foundation has built two training walls for protected contact with the elephants. Until the animals arrive, we sit down and cut sugar cane and bananas into little pieces for treats.

I spend most of my day on top of the straw bales, comfortably watching the target training, in the afternoon we drive out to see the patients whose wounds need to be flushed daily. Mostly, they arise from scratching the eyes after sand got inside, or the elephants are sore from lying in the same position on the same spot too many times. They don’t have a big range of motion. Some can walk a few meters, others can hardly get away from their pole. Other injuries come from the hooks that the Mahouts use. If done right, the hook can be a useful tool, but if the elephants behave aggressively and the mahouts hit them, the wounds can easily become infected. Of course, not using the hook at all would be the best solution, and this is what the target training workshop is for. John, Pang and the others want to show the mahouts that it is possible to train elephants without violence, but with positive reinforcement. Traditionally, the relationship of elephant and mahout is based on fear and punishment, and this workshop wants to show that it doesn’t have to be that way. The positive training methods are even more effective. 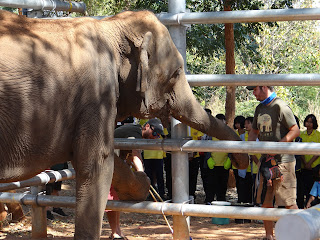 In the future that these people are preparing for, the human-elephant relationship is built on trust and rewards. And in an even further future, we hope there won’t be any more elephants in captivity, but still wild ones…
Today the school kids are visiting. There are three groups consisting of eight to thirty students, one group arriving in a minivan, one in a real school bus, and one on the back of a pick-up truck.
John’s hope is that this generation will learn enough about elephant conservation that these kids won’t want to become mahouts anymore, but fight for the survival of the wild elephants. The elephant is the symbol of Thailand, after all.
While the job usually runs in the family, other than in Nepal, here you can become a mahout even if your father and grandfather weren’t – or you can choose not to follow in their footsteps.
In the evening, it’s time to say my good-byes. The vets drop me off at the Buriram bus station, so that the Mexicans can buy soccer jerseys – Buriram United is the Thai soccer champion!
The bus to Bangkok, for which Nissa booked me a ticket on my phone, offers pre-booked vegan food for me, comfortable foot and back rests, power plugs and screens on every seat and a stewardess who explains the safety features – it all makes me feel like I’m on a plane, flying business class. Six hours later, I check into a hostel near the bus station, where I meet nobody but the French guy who works at the reception, and six more hours later, when I come down for breakfast, nobody else has woken up yet. 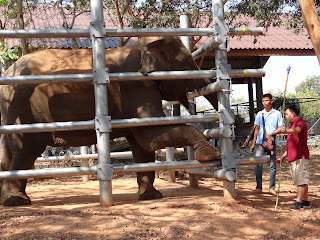 I’m on the road again, and I am not yet sure how to get to my destination. Even though it would have been shorter than going via Bangkok, there was no direct connection. But at the other bus terminal, where I find myself in the morning, I immediately know that from now on it will be easier to find my way around. There are other tourists here, French Hippies – I’ve met more French than Germans so far, but that is soon to change!