Life in the Vegan Town 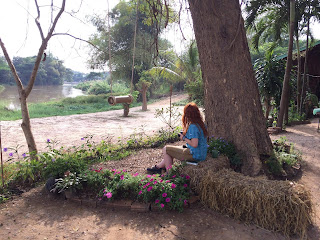 It’s just a spot on the map, nameless, at the end of a nameless road, a few kilometers south of Lampang on the edge of a village. The taxi drivers English is about as good as my Thai (nonexistent), I’m unable to type on the Thai keyboard of his phone and he can’t read the Latin letters on mine. But according to Google, it’s only a twenty minute drive, and by the third time, I pronounce the name of the village well enough for him to understand.

The taxis in Lampang are pick-up trucks with two benches and a small roof on the back, but about halfway I get off and sit in the front with the driver. The door is broken and can only be opened by reaching in through a hole that conveniently is already there, the pedals are rusty and the speed gauge has no indicator anymore. As always, the front is crammed with pictures of the king, Buddha figurines, lucky charms; and the sun protection further blocks the field of vision. We use google maps now, and we both gesture wildly. “Turn left”, I say, waving, the driver nods, points to the left and says something in Thai – probably “turn left now”. It’s working perfectly. Over the bridge by the junk yard and a right turn after the temple. By a gravel road we stop and agree that I can walk from here. Immediately, a motorbike stops. “Where you going?” the woman on the back asks in the broken English that I’m already starting to take on as well.
“Vegan Town.” That’s the restaurant I found with help of the Happy Cow app. It only had a short description and just one review, so I’m already doubting its existence.
“I go there too” she says and points down the road. “Maybe more one hundred meters.” And off they go. 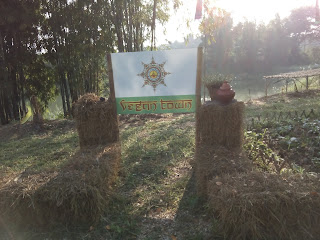 I’ve walked just a few meters when she comes back, alone on the bike this time, probably she dropped her husband off and is now coming back to pick me up. She introduces herself as Aim, one of the partners who founded Vegan Town. Her husband’s name is Tee, and he takes lots of pictures of us, and me. 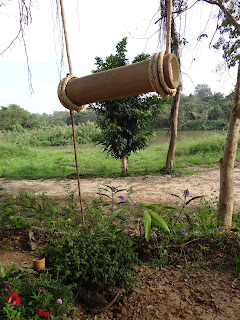 I sit down on a bamboo bench by a bamboo table under a little bamboo roof and order small portions to try out everything the kitchen has to offer today.
The concept of hot tea is not so common in Thailand, if you don’t add the “hot”, you’ll get a homemade, but sugary drink with ice cubes and a straw… But I’ve learned the phrase “mai aow lod kaa” by now – “no straw please”, and actually it doesn’t matter so much, jasmine green tea with soy milk and ice is delicious!
While I wait for the food, Aim shows me around the compound. Vegan Town was founded in November 2018 by around 30 partners and is a farming community. They grow organic fruit and vegetables for themselves and for the restaurant, marigolds for sale (the flowers that are usually sacrificed in the temples and shrines), but it’s also a place to live and work. Who can’t work here can also use a square meter or  two in their own back yard and participate by growing marigolds.
The kitchen is located outside, in the shade of some umbrellas, herbal tea is boiling in a big pot on the open fire, the tables are nicely scattered around a big area between trees. Next to the rose bed, you can sit comfortably on bales of straw and look out to the river Wang. There is a tiny pond by the fire place with fish that eat mosquitoes. The employees’ kids are running around, playing on swings, and practicing the guitar. It sounds turbulent, but due to the large area, I can sit in peace and quiet. No real neighbors, forest behind the vegetable plantations and flower beds, forest on the other side of the river… 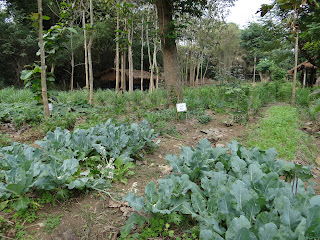 As we walk through rows of cabbage, eggplants, ginger and tomatoes, Tee keeps taking photos. Apparently, not many farang (long noses, Western tourists) have come here before.
“And this is our mushroom house.” Aim points towards a small hut in the shade. After I’ve admired the mushrooms, she asks if I want to try them as well. Of course I do. Back at my table, my food is waiting under a bamboo lid to protect it from insects. Tee has to go back and collect the mushrooms, that he shows me before they are fried. Aim sends him to the plantation again to pick some matching herbs. 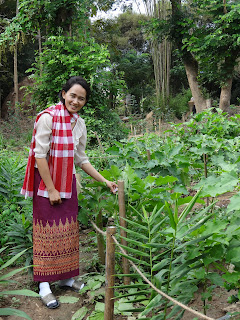 I could sit here all day, looking out at the river, drinking iced green tea with soy milk, listening to the birds singing…
“You can come back tomorrow, we have also free WiFi” suggests Aim. “I also sit here and work.”
But first, I meet Keng, who also works here, and, like Aim, sends a Facebook friend request immediately and will drop me off at my hostel later. With his big straw hat and the rubber boots, he looks like a proper farmer, other than Aim, who is wearing traditional clothes.
They give me some take-away and crispy rice bread, so I won’t starve at the hostel, and then I climb onto Keng’s motorbike. “So, are you coming back tomorrow?” he asks. He lives in the city, so he can take me with him the next morning.
So here I’m sitting now, as I write this, with a river view on the edge of the jungle, among the farmers and vegans, the Thai hippies.
Yes, all of them are actually vegan, not only the people who live and work here, but also many of the guests. My first impression of Thailand was that it wasn’t very vegan friendly, but there seems to be a way around all the fish and oyster sauces! 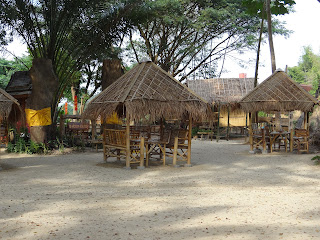 Again, they ask me what time I’d like to go home after lunch, and as Keng has to leave earlier, a woman named Lynn offers to drive me. She explains to me that the big bridge made out of bamboo, that leads from the parking lot at the entrance to the middle of the compound symbolizes the bridge to heaven. “It looks like heaven here, so on the bridge you walk into heaven.” And back to the real world.
Vegan town also offers accommodation, small bamboo huts for 300 baht (8 euros) per night, three vegan meals included.
Next time, I promise, although I’m not sure I’ll ever make it to Lampang again. 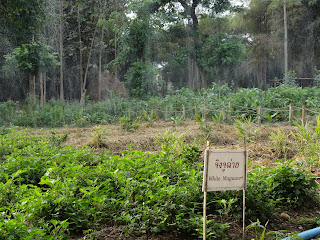 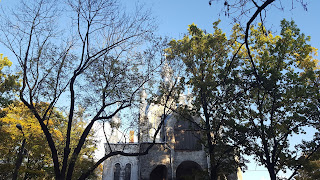 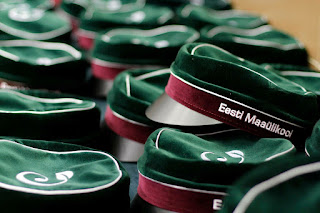