Surviving in the zoo


It is the Thai students‘ last day here. As their year will graduate in three weeks and everyone else is on vacation, for now, I will be the only intern. It’s a Sunday, and a quiet one at that. We have fed the sulcata tortoise though her gastric tube, prepared all the meds and filled them in the handmade syringes for the blow pipe. We drive to the pygmy hippopotamus that needs her antibiotics, give the goat that had surgery yesterday her pain killer and pay a short visit to the puma who hasn’t been eating in a couple of days. Fortunately, he is getting better, so he only gets some supportive potions blown into his thigh muscle and doesn’t have to come to the hospital. The keepers will later pick up these colorfully marked syringes and return them to the hospital staff for proper disposal. We check on a tapir that was born yesterday and inject the chip for identification. Every animal in this zoo has one, and we check the number during every procedure to be able to double check the medical history of the patient. Heart and lungs sound fine, umbilicus is disinfected – that’s it for the baby.
As soon as we’ve tidied everything up, a call comes in. The Barbary’s sheep need to be dewormed. We prepare the ivermectin for the blow pipe and jump into the ambulance. Vet assistant Lam is quick and each of the sheep get two darts into their butts. This way of injecting medicine causes much less panic than catching the animals to administer the drugs directly.
The students are now on their way home to Nong Chok, about to study for their final exams. Time for me to play with Jee Sop, the capuchin monkey who wasn’t accepted by his mother and has to be hand reared in the clinic now. Because he is being bottle fed by people, he is of course used to them, but he has so far been very shy when I came to say hello. Today he sees to know that I’m the only student left, as for the first time, he climbs onto my shoulder and doesn’t seem to want to get back to his toys. Normally, he would always jump to my side of the cage, touch me briefly, and then excitedly jump around before reaching out one of his tiny hands or feet again.
Normally, the student don’t get a day off, but as the others are gone and the remaining staff can’t really think of anything to do for me, I decide to skip the afternoon. I do explain it to the vet assistants, but I’m not sure they understand it. Well, they are going to see that I’m not there anymore. On my way to the main entrance, a scooter stops. The driver gestures me to jump on and says something about “eat” – Or “drink”, the words are the same in Thai. Thus, my half hour walk is significantly shortened. She drops me off at a small coffee shop near the entrance, where she must have seen me with the students at some point. I get the feeling that all of the zoo staff who live in here know me. They will drive me to the wildlife hospital or home without having to ask where I’m going, even if I’ve never seen them before. And during lunch, the students sometimes took me with them and I would buy something to drink here. The owner of the shop knows Mon, a keeper at the clinic who is also vegan. He doesn’t speak much English, but as the words “cousin”, “father” and “uncle” dropped during our first conversation, I’m pretty sure they are somehow related. 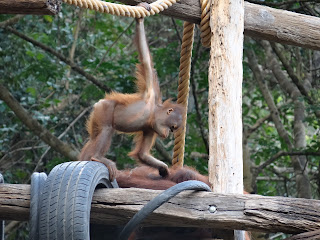 But right now, I don’t need ice tea, I want sun on my skin and wind in my hair… The Thai are really afraid of the sun, wearing hats and long sleeves, seeking every tiny bit of shadow and even wearing surgical masks not due to bad air, but to protect the lower half of their face from getting tanned. So whenever we have no work, we all sit inside in the air-conditioned room with artificial lights. I really missed the natural environment! So I start walking towards the village, where the girls have also driven me a couple of times to buy groceries. It’s about eight or nine kilometers, and I do find some things in the supermarket – but these generally don’t have fresh fruits and vegetables (only the really big ones, but I don’t find one of these out here), and the fresh market only opens in the late afternoon.
Because I don’t want to walk all the way back in over thirty degrees Celsius, I try classic hitchhiking. I get the feeling that the Thai have no idea what the “thumb out” means, but when a farang is walking on foot alone, somebody is going to stop sooner or later anyway, asking where you’re going and what country you’re from.
“Khao Kheow?” the woman on the scooter asks. Is it my scrub top that gave me away or dies she know who I am? She drives me back to the main entrance and starts chatting with a ticket vendor. Maybe she actually realized that I was the European from the wildlife hospital?
At the entrance, lots of stalls sell produce for feeding the animals to the visitors. Nobody has to know that I’m buying these bananas for myself, right? 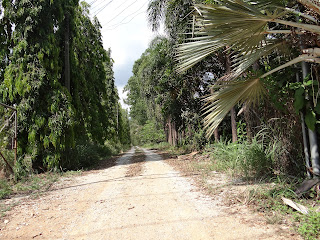 I stroll past the elephants towards “Australia”. We’ve had kangaroos and wallabies in our procedure room, now I want to see how they live. The Open Zoo” also has koalas, and according to Robinson in his book “Life at the zoo” this is quite a challenge. They only eat eucalyptus – and they get their entire water from the plants. Once these slow, fluffy animals stop eating, they will start to dehydrate. “Koala” actually means “doesn’t drink”: But it seems to work, these three in front of me seem to be quite lively and I haven’t seen any on our necropsy table. 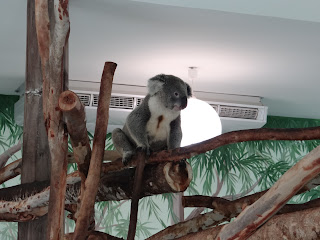 My next stop are the apes. As the chimpanzees and orangutans have to move from their spacious hillside enclosures to the inside quarters every night, I haven’t had the chance to see them yet. Today, I finally get to climb the stairs through the jungle and pay them a visit.
The road between their home and the hospital is one of the longest and most boring in the park, with only the crossroad towards the big cats, trees, and some wild macaques and deer. It’s a nice rad for a run, but today I have been waking so much, that I’m glad when the golf cart stops and the family asks me to ride with them.

The saddest thing about a zoo are the surplus animals. Breeding programs are successful, groups become too big for their housing, or they just don’t get along; or, as in this case, a zoo closes and ships their animals off to another one. All of the medical equipment from the Bangkok Dusit zoo has come here along with a lot of animals. The lone elephant cow is now with Pang in Surin, but the two giraffes are in Khao Kheow and as they already have a different species of giraffe, they don’t know what to do with them. Often these cases become permanent residents in the hospital, like a hand full of binturongs, some toucans and slow loris. Almost daily, we have to drive up a steep “staff only” road to what I learn is called “area 95”. Langurs and Malayan Sun bears reside here – and the public never gets to see them Malayan Sun Bears, by the way, are a challenge to treat. We have to trim their claws and draw blood for check-ups, and if they don’t scratch off the dart syringes before actually getting the anesthetic drug into their muscle, than they might still need a second dose. They fall asleep slowly, and sometimes they wake up when you come closer. The langurs are easier, as they injure themselves quite often, I have seen Pet and Lam catch a couple of them already, and we send them to Lalaland with isoflurane in the hospital. The two species don’t have anything in common, but it seems, there was space up here. Like it happened with the pelicans, pigs and otters behind the puma enclosure. 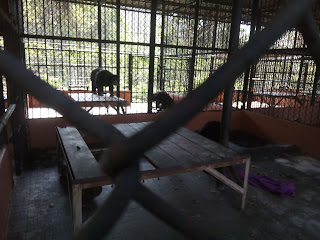 The surplus animals never get to go to the pretty, green and spacious enclosures. They live in their heavily fenced ten square meters, concrete floor, food, water, maybe some branches to climb on.
It’s not surprising that so many of them develop abnormal behaviors… 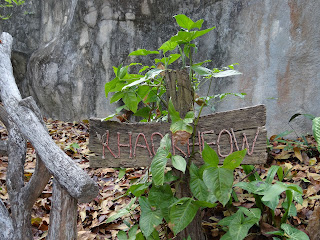